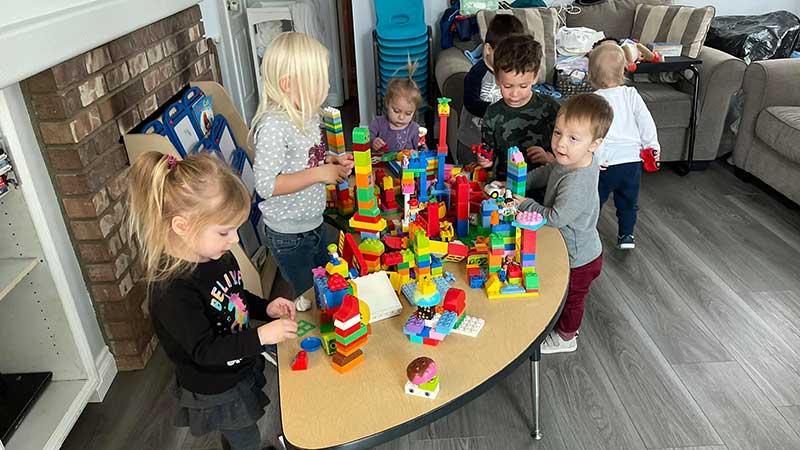 Without a doubt, of all the many toys in our home, the kids love building legos more than playing with any other toys. It’s the old standby that they never get tired of. So, a few months ago it was International Legos Day and the children participated by building their own Lego city! Although the older children paved the path all the kids contributed, from the oldest to the youngest and they were all so proud of their finished project. One thing for sure, it made me remember just how much kids live building legos!

Through the years operating my child care I’ve seen the popularity of toys come and go. I can tell you from experience, there is nothing that has ever been as popular or lasted as long as Legos. We have peg boards, action figures, hot wheels, dolls, omagols, magnatiles and just about any toy you can think of. Of all the toys, legos are the best!

To get the kids started on building their Lego city we first watched a youtube showing kids building various lego structures. Then, we got them started with organizing the table and set a few ground rules. You might not think this is necessary but remember, we have some one year olds who think it’s great fun to steal legos or take them apart while no one is looking. So, other then policing the younger ones, we stayed out of it and set them loose.

Naturally, the 4 year olds took the lead, but we were proud to see how they helped guide the younger ones along. Of course, they didn’t want the younger ones to mess things up either! This project kept their attention for quite some time however the younger kids lost focus a little sooner. I think that was a blessing as it allowed the older kids to finish up the project without much delay.

I’ll tell you, we were impressed with how the kids worked together on their project. Even better, they were quite proud of themselves when finished.

What About Other Toys?

Once upon a time it was simple blocks or perhaps Tinker Toys. In fact, I have tons of blocks and Tinker Toys, and though the large foam blocks are popular, with the Tinker Toys they can take them or leave them. I never allowed the more complicated, erector sets, mostly because that is the type of project that requires one on one guidance and more help than I had available.

The Kids Never Get tired of Legos

The legos are available for the kids to play with everyday because they never get tired of them. I guess it’s because they are so versatile. The child doesn’t necessarily need to build much of anything to enjoy them. They can make a little car, truck or airplane in a jiffy. They can make a play house or little kitchen almost as quickly. That is the secret to legos! However, with all other toys I only allow their use occasionally. Sometimes I will take groups of toys and put them away for another day. Then, a month or two later I bring them out and kids are all back on board for playing with them. There’s no need to ever store away the legos as their popularity is never ending!